The WC Young Horses is always a pleasure to watch for breeders and dressage enthusiasts. The very best five-, six- and seven-year-olds are up against each other and this provides the breeders with a lot of information. Among the participants we often see young, promising approved stallions as well as offspring of relatively young sires.

The WC Young Horses is broadly perceived as a springboard for up-and-coming Grand Prix-horses. Many of the horses that were crowned world champion or were ranked among the top as a young horse, become equally successful in the Grand Prix later. The next collection of the Global Dressage Auction is connected in various ways to the World Championships which bodes well for the future.

Daughter world champion producer
The mare Daylight de Hus has a foal by Fynch Hatton at foot this year that will be part of the next collection. Daylight de Hus is a full sister of the WC-horse Dorian Grey de Hus that placed fifth in the five-year-old final with Jessica Michel Botton. The sire of these two horses is Don Juan de Hus that obtained the sixth position at the 2017 World Championships at five years of age and also sired the world champion Don Martillo.

Half-sister WC-horse Ferdaux
Sir Donnerhall-daughter Circle of Trust Two gave birth to a foal by Bordeaux this year. For years, Bordeaux has been a major supplier of contestants at the World Breeding Dressage Championships for Young Horses. This year was no exception. His son Johnny Depp secured a seventh place in the final with Renate van Uytert- van Vliet. Furthermore, Circle of Trust is the half-sister of the KWPN-approved stallion Ferdaux that participated in the World Champions for Young Horses twice with Kirsten Brouwer. As a five-year-old he placed 10th in the final and as a seven-year-old 11th. By now, he is active in the Small Tour. Ferdaux’s son and KWPN-approved stallion Las Vegas also drew attention at the world championships this year. Ridden by Franka Loos, the five-year-old scored a 9.5 for trot and 10 for canter in the final, eventually securing the fifth position.

9.2 for trot Valverde
Besides Bordeaux, we find some more stallions in the coming collection that also sired last week’s Wordl Championships contestants. Vitalis is the sire of the foal Richmond. This foal’s granddam is the renowned mare Zhara-Obertje. Vitalis was dealt a strong hand at this year’s championships via his offspring Valverde. This stallion was third in the small final and eventually eleventh in the final for seven-year-olds, receiving a 9.2 for his trot. In 2019, the then five years of age Valverde placed fourth, narrowly missing out on the podium.

“Highly topical”
Selector of the collection Koos Poppelaars is proud of this collection: “It’s great that we once again succeeded in composing a highly interesting auction collection after the edition in June. Besides established sires we are also keen on a damline that produced sport horses and/or approved stallions. A nice touch is that the selected foals are highly topical because of their connection to the WC Young Dressage Horses.”

This Saturday the shooting day takes place for the collection that falls under the gavel from 7-10 October. 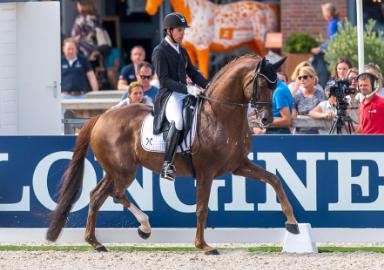 Overbite in foals: “Certainly nothing to be afraid of”