They are stunning, sensational and all what you’re looking for! 14 dressage foals and 4 dressage embryos make up the sixth auction collection of Global Dressage Auction. Genetically top interestingly bred, the looks and real magnificent movers, these foals will make your dressage dreams come true.

Two-fold World Championship bronze medalist Hermès N.O.P., two-fold world champions Kjento and D’Avie and world champion Sandro Hit are just a few of the great names attached to this collection. On the dam’s side, this collection also leaves nothing to be desired. How about the filly Swingvorette (s.Las Vegas) from the direct dam line of Don Juan de Hus? Both go back to the same grandmother. Or the colt Sognador (s.Giano)? His dam is none other than the full sister of the World Cup horse Giraldo who was important in Ireland’s team result at the World Championships in Herning last August.

Best performance genes
One of the best Dutch performance genes are represented in Soulmate van ‘t Studutch. The pedigree of this son of Sandro Hit is graced with three Grand Prix mares in succession. And he is bred out of the fantastic Manda-line of Leunes van Lieren to which many Grand Prix horse is related. Grand Galaxy Win produced both the world champion and bronze medalist of the six-year-olds at the World Young Dressage Horse Championships. Sidney Finn D is out of this direct dam line and carries on the sire’s side the blood of Fürst Jazz, which in turn traces back to the famous mare Endy (s.Ulft). The proven dam line of Olympic Parzival is also represented in this collection. The For Romance I daughter Skye van ‘t Studutch has as grandmother the full sister of Adelinde Cornelissen’s Parzival.

Exclusive embryos
Just a few of the phenomenons that pop up when we talk about this top collection. In addition to the foals, four exclusive embryos are also selected. The unborn foal of Olympic Total U.S. comes from the dam line of Olympic Dablino FRH, the half-sister of team gold winner Blue Hors Zack is the dam of the unborn foal by Indian Rock, who left a smashing impression at the World Championships last summer. An unborn foal by Glock’s Toto Jr out of Finnlanderin’s half-sister is part of the collection, in addition, the granddam is none other than Don Schufro’s full sister and the fourth embryo is by Jameson RS2 out of a dam by Secret, which also traces back to the dam line of the keur stallion Olivi.

All info at a glance
Check out the 14 foals and 4 unborn foals at www.globaldressageauction.com. There you will find all (veterinary) information, photos and video. Want to know more about one of the lots? Feel free to contact Koos Poppelaars at 06 52 46 64 47. Registering for the auction is easy and fast. Bidding starts on Thursday, October 6, and the auction closes on Sunday, October 9, from 8:00 pm. 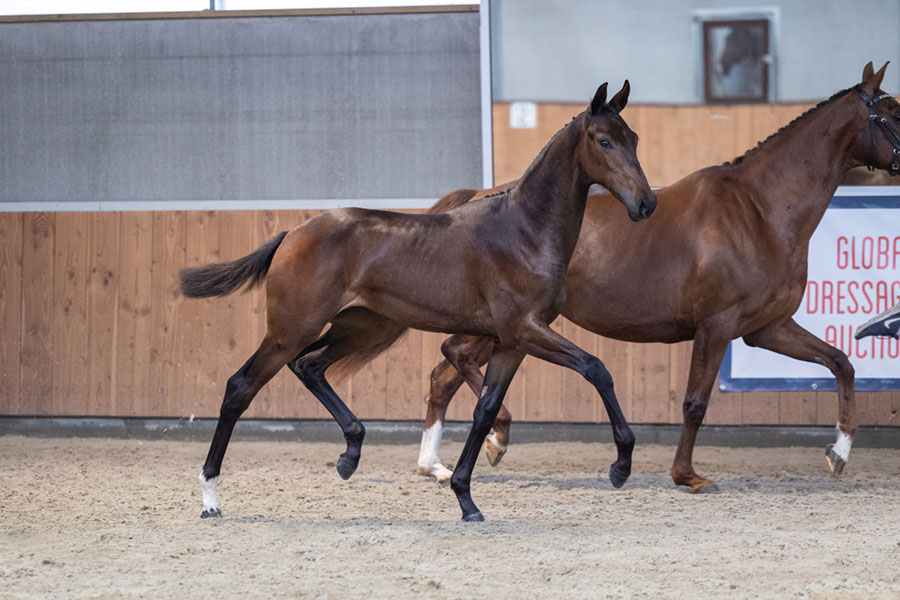